President Donald Trump released his first formal proposed budget to Congress on 16 March 2017. As promised, the “America First” budget is proposing $54 billion in cuts throughout different federal government agencies and programs to offset the increase to the defense budget. Here is a snapshot of some departments that will be experiencing budget cuts:

President Trump wants to reduce foreign aid, and has reflected this by proposing a 31.4% cut to the Environmental Protection Agency (EPA) and a 28.7% cut to the State Department and the U.S. Agency for International Development (USAID). If Congress approves this budget, it would cut funding for international development programs and the World Bank. It would also remove funding from programs aimed at combating climate change, therefore, culminating U.S. support to the United Nations’ climate change programs.

These budget proposals will have a direct impact on the movement for Community-led Development (CLD). Independent agencies, such as the U.S. African Development Foundation, U.S. Trade and Development Agency, Overseas Private Investment Corporation and the United States Institute of Peace have been suggested for elimination. These agencies provide economic support, childhood development, education and food security, amongst other development services to communities throughout Africa, Asia, and the Middle East. The CDL programs rely on the financial support of USAID, the State Department and numerous independent agencies to support their missions. It is imperative that Congress does not allow this blueprint to pass because of the negative repercussions it will have on U.S. foreign policy priorities and international development goals, which have been the frontrunner for women’s rights.

Community-led development begins and ends with the empowerment of women. This budget proposal would jeopardize years of progression that development programs have been able to achieve, particularly in the areas of reproductive and sexual health and gender equality. The ambitious Sustainable Development Goals (SDGs) rely upon investments and resources from the United States, as well as other donor countries. The influence the U.S. has over foreign policy cannot be overlooked. Their funding is crucial in garnering support from communities around the world to see the SDGs come to fruition. The proposed budget has received strong criticism from both Republicans and Democrats.

The Trump administration’s budget proposal focuses on allocating majority of the federal dollars towards the defense budget. It is important that the International Development community stress to Congress that the USAID and the State Department are important entities to protect the United States from foreign attacks against our great nation. It is imperative that both the United States and the rural international communities are backed by the USAID and State Department. 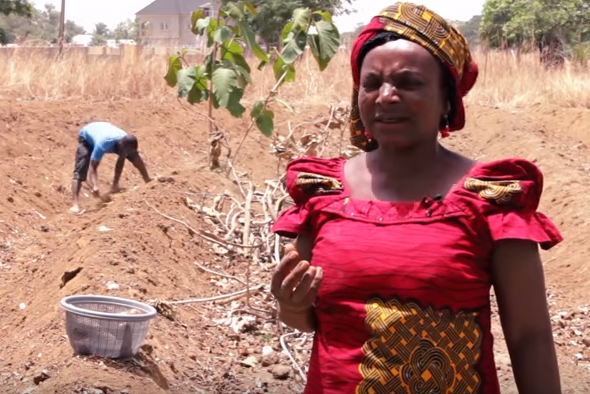 Last week  Oxfam America hosted a Brown Bag Lunch, which couldn’t have came at a better time as it was a day after International Women’s Day 2016, to share their Female Food Hero(FFH) Contest . The FFH Contest recognizes the achievement of rural women who are small stakeholder farmers and is evidence of how providing a platform for  women to be agents of change can benefit entire communities. Oxfam America had special guest Monica Maigari, one of the 2014 FFH winners in Nigeria,  to speak on her experience.

With the recognition as a Female Food Hero many women in Maigari’s community respected her, counted on her to be the voice of the community, and depended on her to shed light on the challenges they faced. In Nigeria where the population is 184 million people , women account for 60-79% of the workforce agriculture, but only 7.2% them own land, according to a representative from  the Female Food Hero initiative in Nigeria.

Maigari mentioned that because women are denied many land rights they have to give money or part of their harvest to use the land. This limits economic freedom for women and disproportionately undermines women’s position as the main producers of  agriculture in Nigeria.  Because of her recognition as a Female Food Hero, she has gained respect and was sent to  speak with the chief of her province advocating for her community on issues such as land-tenure rights for women.

Oxfam is a partner  in the Movement for Community-led Development , a coalition of organizations that believe in a  gender-focused, transformative process that “empowers citizens and local authorities to transform entrenched patriarchal mindsets and take effective action.”  Oxfam’s initiatives like the FFH contest is addressing the patriarchal mindset that challenges rural women farmers and harnesses their empowerment as key change agents in communities to take action.

As a benefit of being a Female Food Hero, Maigari  was awarded a cash prize of 200,000 Nigerian Naira (NGN), which enabled her to purchase two hectares of land to farm -which is not an easy feat for  women in Nigeria.  She also uses her land to benefit the community by allowing the land to be used as an “experiment” lab to see which crops or farming strategies work well.

The process of selecting the Female Food Hero was a national-wide effort where across Nigeria female farmers were were able to send in over 3000+ nominations ,and after a screening of the nominees, 12 finalist were selected. As one of the 12 finalists,  Magari participated in a week long of events receiving training and information surrounding women and farming, meeting other industry professionals,  and other women farmers alike. She mentioned that she is going back home and sharing the trainings received through a cooperative she has helped form.

Monica Maigari says, “It’s important that women teach women because they listen to themselves. A man  just cant go to a women and teach, they will not accept it. Women come and they will listen. Man don’t have the patience.Women will have patience to demonstrate correctly [to other women].”

When Maigari asked what was the most important advice on replicating initiatives like the FFH contest she said the trainings should give more attention to labor saving strategies.”We need drought resistance seeds and [other technologies] that makes agriculture easier for women so they can balance [work and home duties].

By engaging women as key change agents and rethinking the power of community , long-lasting sustainable development can occur to make the dream  of living in a food-secure word without poverty a reality. However, another caveat to making that dream a reality  is recognizing the important role of women as key stakeholders in these issues.